YELLA BEEZY PERFORMS IN THE CAPITOL ROOM AT HMAC 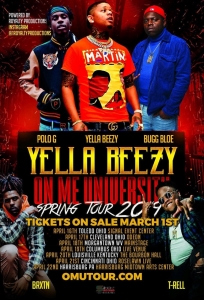 The rapper Yella Beezy was barely known outside of Dallas just six months ago, but when Beyoncé and Jay-Z’s On the Run II tour came to town in September, they invited the 26-year-old to open for them. That’s thanks to “That’s on Me,” which is both a great single and a prophetic one: “You can snooze if you want to,” Beezy warns, “but not on me, baby.” And sure enough, the week ending September 22nd, almost a year after it originally came out, “That’s on Me” was crowned the Number One record on mainstream rap/R&B radio.