Southern Culture On The Skids has been spreading the rock and roll gospel since since they formed in Chapel Hill, NC in 1983. Guitarist/singer Rick Miller, drummer Dave Hartman and bassist/singer/heartbreaker Mary Huff, play a greasy mix of surf, rockabilly, R&B and country-fried garage with a side of psych, all the while driving fans into ecstatic, sweat-drenched paroxysms of joy. It’s a musical gumbo Miller calls, “Americana from the wrong side of the tracks.” The band has been prolific and ubiquitous for over thirty years, touring everywhere from the North Carolina Prison System to Mt. Fuji, Japan and delivering what Rolling Stone calls “a hell raising rock and roll party.”

In 2014 the band was honored by the Southern Folk Life Collection at the University of North Carolina Chapel Hill with an exhibition featuring their music and cultural contributions. The flame-adorned La-Z-Boy from the cover of their Plastic Seat Sweat LP now resides at UNC-CH! 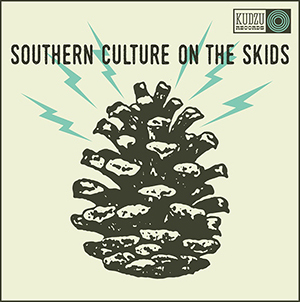 Southern Culture On The Skids’ newest album, The Electric Pinecones, was released on September 16, 2016. It’s the band’s fifth album on their own label, Kudzu Records. The album features 12 original SCOTS tunes — 11 brand new songs and a whole-lotta NOLA remake of the SCOTS classic, “Swamp Fox – The Original.” All the tunes were produced and recorded at Rick’s studio in NC, The Kudzu Ranch.

The Electric Pinecones is a bit of a departure for the band conceptually and sonically. The inspiration for the record was born in an alter-ego side project from the early years of the band. “The Pinecones was folk-a-hill-a-billy garage band we used to put together just for kicks,” Miller relates. “We loved the sound of ’60s west coast folk rock and psych bands. The Pinecones was our outlet for material that was not in the SCOTS vein. We even opened for ourselves occasionally. The Pinecones set list was the jumping off point for this latest collection of songs.”

The first single off the album, “Grey Skies,” is a minor key mood piece with that folk-a-billy, psychedelic sound. Listen to how the acoustic 12-string riff slides into the band’s hypnotic rhythms that propel Mary Huff’s reflective vocal into the mind’s eye of times past and love lost. “Check out the Mellotron on the chorus – that is a first for us,” Miller says.

The lead off track, “Freak Flag,” is more upbeat, but no less tweaked, with modulating guitars riding on pounding drums after the first verse. The song’s message is a good one – it is okay to be different and always respect yourself. The band debuted the song to an auditorium full of rowdy students at Carrboro Elementary School. “I was nervous,” Miller says “if the kids don’t like something they let you know, but when they started singing along with the second chorus and waving their imaginary freak flags in the air, I knew it was a hit!”

“Dirt Road” is Mary’s three-minute ode to séances, thunderstorms and good lovin’ long gone. The song is a backwoods southern gothic ghost story that opens with a big tom fill then twists and turns around a folky strum and a fuzz guitar. Mary’s spooky-good vocal takes it down that dirt road way back into the piney woods.

The album also has some country rock songs that highlight the melodic side of SCOTS, with “Baby I Like You,” “I Ain’t Gonna Hang Around” and “Given To Me” featuring some of the best harmonies Rick and Mary have ever recorded.

“Waiting On You” is the longest song on the album, coming in at 4:22; it’s a folk-garage-rocker with a sing-a-long chorus that segues into a surf raga breakdown before heading back to the big riff and out.

The album has traditional Southern Culture flavor too. Check out the remake of “Swamp Fox – The Original”. This take goes back to the beginnings of the song and is much closer to capturing the essence of the many all-nighters the band pulled in NOLA with friends and colleagues. The country funk of “Rice and Beans,” is a good humored tale of a cash strapped southern courtship, and “Midnight Caller” is Mary’s slinky R’n’B flavored woman-to-woman warning about bad men looking for good times.

Song for song, on The Electric Pinecones, Southern Culture On The Skids continues to blow minds and blur the lines between genres delivering a stellar album. From their 1985 debut Voodoo Beach Party, to their 1995 international smash, Dirt Track Date (featuring the hit single “Camel Walk”), and now to the SCOTS-ified tunes of The Electric Pinecones, 30+ years, 200+ songs and 1,000,000+ road miles in, Southern Culture On The Skids just continues to get better with time.